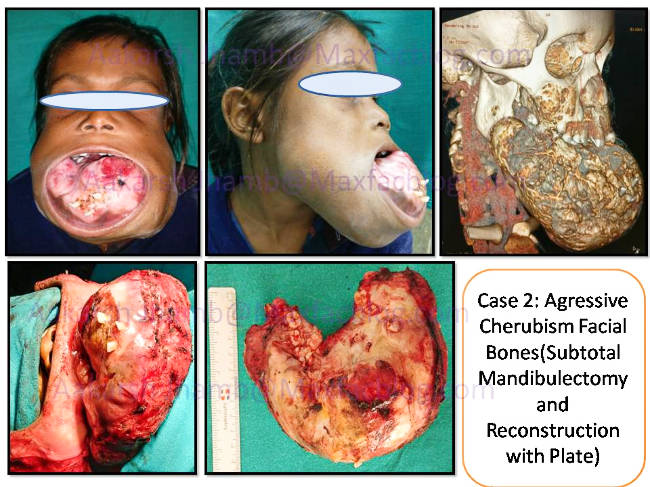 It doesn’t happen frequently that an intense desire to help a fellow human has be balanced out with the risk of  inadvertently causing much greater damage including loss of life.

Krishna was one of those patients for whom all of my team had felt a deep desire that we should help this child but I was in two minds in view of the risks involved. Risks were real and apparent viz. she was grossly underweight (only 15 kg), both Nasal and Oral Airways were blocked, moreover she was anemic (Hb 6.8) and lastly no one had seen a mandibular tumor of this magnitude.

Nine year old Krishna was brought by a charity organisation for opinion regarding progressively growing lower jaw swelling in December 2016. Awestruck like everyone in the hospital, I decided to take it stepwise while sticking to fundamental principles of Maxillofacial pathology management. Detailed history was taken which was followed by a thorough clinical examination. Contrast CT scan was advised which showed large fluid filled spaces in the expansile lesion.CT scan depicted similar lesion in bilateral maxilla obliterating the nasal airways. Incisional biopsy was done and a diagnosis of Aggressive Cherubism was made by correlating the clinical presentation.

Cherubism is a rare genetic jaw tumor which grows slowly till puberty and then shows spontaneous regression after puberty. Thus, keeping the natural course of disease in the background and all the perceived risks in foreground, A decision to wait and watch was made after considerable discussion with parents and my senior Maxillofacial colleagues in various other institutions.

She was seen twice in the following year but the lesion just kept growing bigger. Finally,In the third followup consultation during September 2017, she was seen with severe pallor and dehydration (Hb 3.9gm% and Body weight 13kg). Blood transfusions were done and Nutritional buildup was done. Considering the clinical deterioration in overall health of the child, the earlier management Plan of observing the tumor till puberty was shelved and a Decision to operate early was made.

On Preoperative assessment,it was deemed to be very high risk (surgical as well as anesthetic) procedure as expected. Oral & Nasal airways were absolutely inaccessible for intubation because of tumor growth which had blocked the nasal cavity. So Elective Tracheostomy was carried out to administer General Anesthesia and to control the airway postoperatively as well. Subtotal Mandibulectomy was performed via bilateral submandibular approach with midline splitting.

Despite profuse intraoperative hemorhhage, lesion was completely excised and reconstruction done with Mandibular Reconstruction plate. Excess soft tissue was removed to avoid excessive jowl formation and to achieve oral competence for preventing drooling. It was quite tricky to adapt the mandibular reconstruction plate because no guide was available. Bilateral ramus and condyles were spared in the hope that future jaw growth can take place. Maxillary lesion was curretted out to just delay its growth.

Postoperative she was kept in the ICU for monitoring purposes. Rest of the hospital stay was uneventful and feeding was started via Nasogastric tube on 2nd day. She was discharged on 9th day of admission with oral hygiene instructions as oral diet was allowed. All wounds healed uneventfully and staples were removed on 12th day. On 6 month follow up visit, She was doing very well as her nutritional status had improved considerably.Most importantly she had regained her confidence and had received social acceptance from friends & villagers alike. 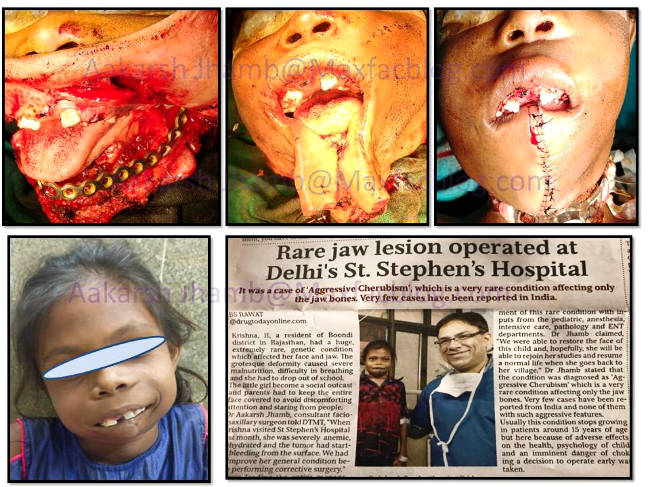